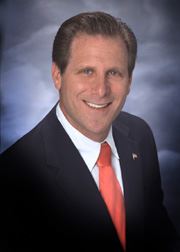 Mayor Chris Vincent was raised in Great Neck, New York, and is the youngest of four children. He graduated from Great Neck South High School and attended Queens Borough Community College to study architecture and pre-engineering.

He began his career as a Drywall Contractor working in Manhattan, NY. He moved to Broward County in 1987. Chris founded Tropical Drywall Incorporated in 1988. He also owns Toto Enterprises/Reliable Building Services.

Chris and his wife, Christine, were married in 1998. She is a local resident who graduated from Cardinal Gibbons High School in 1984. They have one daughter, Paige, who loves the beach and her hometown - Lauderdale-By-The-Sea.

Mayor Vincent will continue to dedicate his time on the Commission to serving the needs of the community and following up on his campaign promises to upgrade the Town's infrastructure. He will listen and respect all points of view and ideas. He is proud to serve and thanks the Town's residents for electing him to serve consecutive four-year terms in 2010 and 2014. Chris was elected to serve as the Town's Mayor in 2018.